The Dongola a white lateen rigged vessel originally built in England , approximately in 1835, was the original private yacht for Sultan Hussein. The first time " Dongola" is mentioned was through Amelia B Edward's book, " A Thousand Miles up the Nile ".

Amelia Ann Blanford Edwards was a journalist, novelist and Egyptologist, born in London in 1831, she founded (and with R.Stuart poole), in 1882 the Egypt Exploration Fund, later renamed Egypt Exploration Society. who worked on many excavation sites in Egypt as well as in Sudan.

The findings of the EES also include a sculpted model of Amarna's Queen Nefertiti and the no less famous funeral temple of Pharaoh Hatshepsut at Deir el-Bahari on the western shores of Luxor, ancient Thebes. The EES has truly made a remarkable contribution to the study of the ancient Egyptian world.

Amelia Blanford Edwards published on "Pharaoh's, Fellahs and Explorer" at Harper and Brothers in New York in 1891, but it was earlier in 1976 that our heroine published "Thousand Miles Up the Nile" at Georges Routledge and Sons, London.The book, which became famous for its description of Egypt in the 19 th century, describes the archaeologist's journey all along the Nile from Cairo through Malawi, El Amarna, Abydos, Denderah, Karnak, Luxor (Luxor). , Esna, El Kab, Edfu, Gebel el-Silisleh, Kom Ombo, Aswan or Abu Simbel aboard the Dongola dahabieh, praised by these Egyptian explorers for their study trip.

The Dahabeya Dongola, this traditional sailboat, was truly the setting for the story of "Thousand Miles Up the Nile" indivisibly linked to the adventures of these great discoverers and archaeologists and it is in this sense that it became the historical Dahabeya of Upper Egypt.

Built in 1835 Dahabiya Dongola and become legendary, it was maintained, restored and modernized (electricity, hot water,) at the option of its owners.

The dahabeyas of course, do not descend from the Pharaohs as one can read or even hear it and the, on the oriental trade brochures for the tourists, but the Dongola dahabiya remains attached to the 19 th century as well as to the history of ancient Egypt through Amelia B. Edward and the very honorable "Egypt Exploration Fund".

Always available for the authentic amateurs, aboard dahabieh Dongola you will be able to contemplate the magic of the sites loaded with history, accessible only thanks to are flat bottom.

The banks and the islands that line the Nile will leave you an indescribable scent of eternity, far from the mass tourism and not limited by the seven, the mysterious, the infinite and the immutable luminosity of Ra will allow you to discover the true nature of Egypt.

The Dongola is the ideal place for the grand Nile tour dating back to the old times where the english lord and ladies travelled from Cairo to Aswan during winter season.

The Dongola offer 5 cabins with private bathroom , for a maximum of 7 peoples  on board.

The large sundeck provides much space for relaxing and enjoying the passing by landscape of Nile valley where time stands still.

Enjoy the Nile trip on our historical Dahabiya Dongola , a place with spirit, charme and modern comfort. 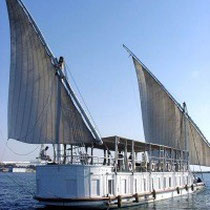 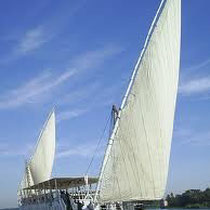 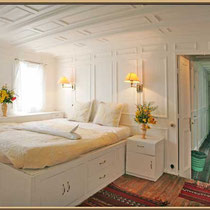 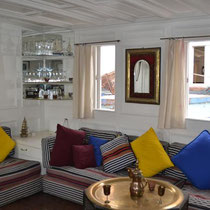 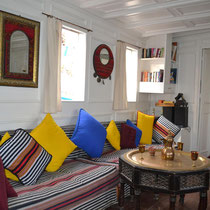 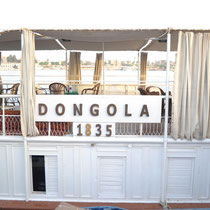 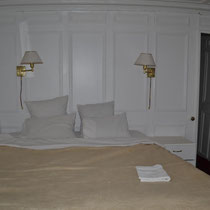 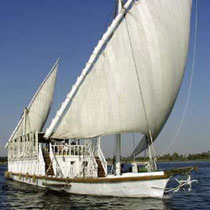